Most Americans recognize the dangers of driving under the influence of alcohol, but crash statistics indicate that driving “under the influence of electronics” may be just as, if not more, deadly. The State of Washington recently implemented a distracted driving law, effectively banning cell phone use behind the wheel. The new anti-distraction initiative begins with a six-month grace period, during which time police officers will give warnings and provide educational cards to drivers caught using phones behind the wheel.

The new law aims at driving awareness over a public safety issue, not simply issuing tickets. However, officers will decide whether to warn or cite drivers on a case-by-case basis based on the severity of the driver’s actions, his or her attitude when speaking with the police, and the driver’s record.

The Statistics Behind the New Law 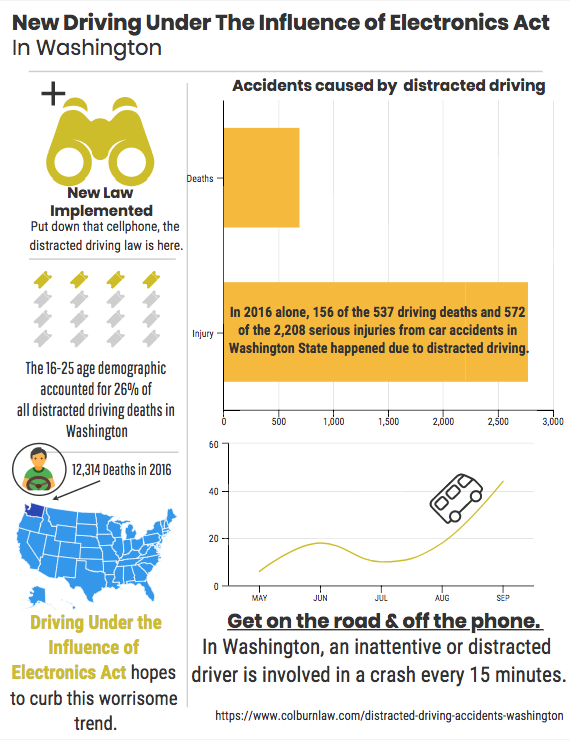 Drivers using cell phones for personal calls, GPS navigation, social media, or even texting behind the wheel contribute to this statistic, and the new Driving Under the Influence of Electronics Act hopes to curb this worrisome trend. Drivers must exercise care and caution behind the wheel, and all phone use while driving is now illegal. The only exceptions apply to emergencies and 911 calls or necessary calls between professional drivers and their dispatchers.

A first-time ticket for electronics use behind the wheel under the new law will lead to a $136 fine, increasing to $234 for subsequent offenses. Additionally, drivers may see an auto insurance premium increase if they committed other traffic violations at the same time. While traffic citations, fines, and insurance rate hikes are indeed cause for concern, the main problem with distracted driving is the danger it poses to the driver and everyone else on the road.

Cell phone use while driving is one of the most distracting activities for a driver, as it requires the driver’s attention as well as the use of his or her hands and eyes. This means the driver is not paying attention to the task at hand, does not have full control over his or her vehicle, and cannot react as quickly to changing road conditions. It is never worth the risk to use a cell phone or other electronic device while driving, and these new laws will hopefully encourage safer driving throughout the State of Washington.