Recently, I represented a client who was involved in a significant car crash near the Interstate 90 and Interstate 405 interchange in Bellevue, Washington.  He was in a through lane when another driver suddenly changed lanes and cut him off.  In the diagram below, my client is Unit 1 (black) and the defendant driver is Unit 2 (red). 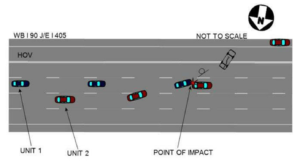 Washington State Patrol responded to the scene due to the severity of the car crash.  Unfortunately, my client was being treated by Emergency Medical Technicians when the State Troopers arrived and investigated the collision.  He was unable to provide a statement.

Troopers took statements from multiple independent witnesses who confirmed that the other driver failed to yield the right of way to my client.  As a result, the other driver was charged with making an unsafe and illegal lane change in violation of RCW 46.61.140.

However, State Troopers also charged my client with Negligent Driving in the Second Degree.  The Troopers claimed that my client was driving too fast for traffic conditions.

My client asked me to help him in his claim for personal injury damages against the other driver and his automobile insurance company, GEICO.  Based upon its insured’s version of events, GEICO denied liability and alleged that my client was 100% at fault for the auto accident.

However, I first presented GEICO with the multiple witness statements gathered by Washington State Patrol that confirmed the negligence and fault of the defendant driver.  I also told my client’s story by pointing out the catastrophic injuries that he suffered.  Ultimately, I successfully negotiated a settlement with GEICO for the defendant driver’s liability insurance policy limit.

Next, I appeared at King County District Court, East Division, in Issaquah, Washington, to contest the traffic infraction.  Negligent Driving in the Second Degree is a traffic infraction punishable by a fine up to $550.

Interestingly, this car accident happened on a stretch of Interstate 90 with Variable Speed Limits that is part of Washington State Department of Transportation’s Active Traffic and Demand Management program.

I was happy to help my client not only recover compensation for his injuries and damages, but also defend against an incorrectly issued traffic ticket.