[Study] The Most Dangerous Intersections in Washington

Every day, hundreds of people are involved in motor vehicle collisions throughout the state of Washington.  Nearly half of these collisions occur at or are related to an intersection.

At Colburn Law, we are acutely aware of the devastating toll that car accident injuries can take on victims and their families.  For this reason, we set out to identify the most dangerous intersections in Washington and provide motorists with valuable information to keep themselves and their loved ones safe.

We worked with data visualization agency 1Point21 Interactive to analyze five years of Washington collision data, from 2017 – 2021. We identified 50 intersections where both a high volume of collisions and injuries occurred during those years.

Below, we list the most dangerous intersections in Washington.

The map below is interactive.  Use the mouse wheel or touch gestures to explore, zoom, and hover to reveal more information.  Circles in blue indicate one of the 50 most dangerous intersections in Washington, while the gold dots indicate other intersections where collisions have occurred.

*If viewing on a mobile device, rotate to landscape for the best viewing experience.

What makes an intersection dangerous?  A high volume of collisions and injuries.

Over 70,000 unique intersections saw at least one crash during the study period, with an average of 2.5 crashes each.   Intersections among our 50 most dangerous, on the other hand, averaged 78.24 crashes each.

While it is true that many of the crossings on the list below are high-traffic volume intersections, we believe that volume contributes to the danger.  It means that it is more likely that someone will be involved in a collision there.

Table: The 50 Most Dangerous Intersections in Washington

Three of the five most dangerous intersections (and five of the top ten) were found in Kent. Below is a closer look at them and the rest of the top five. 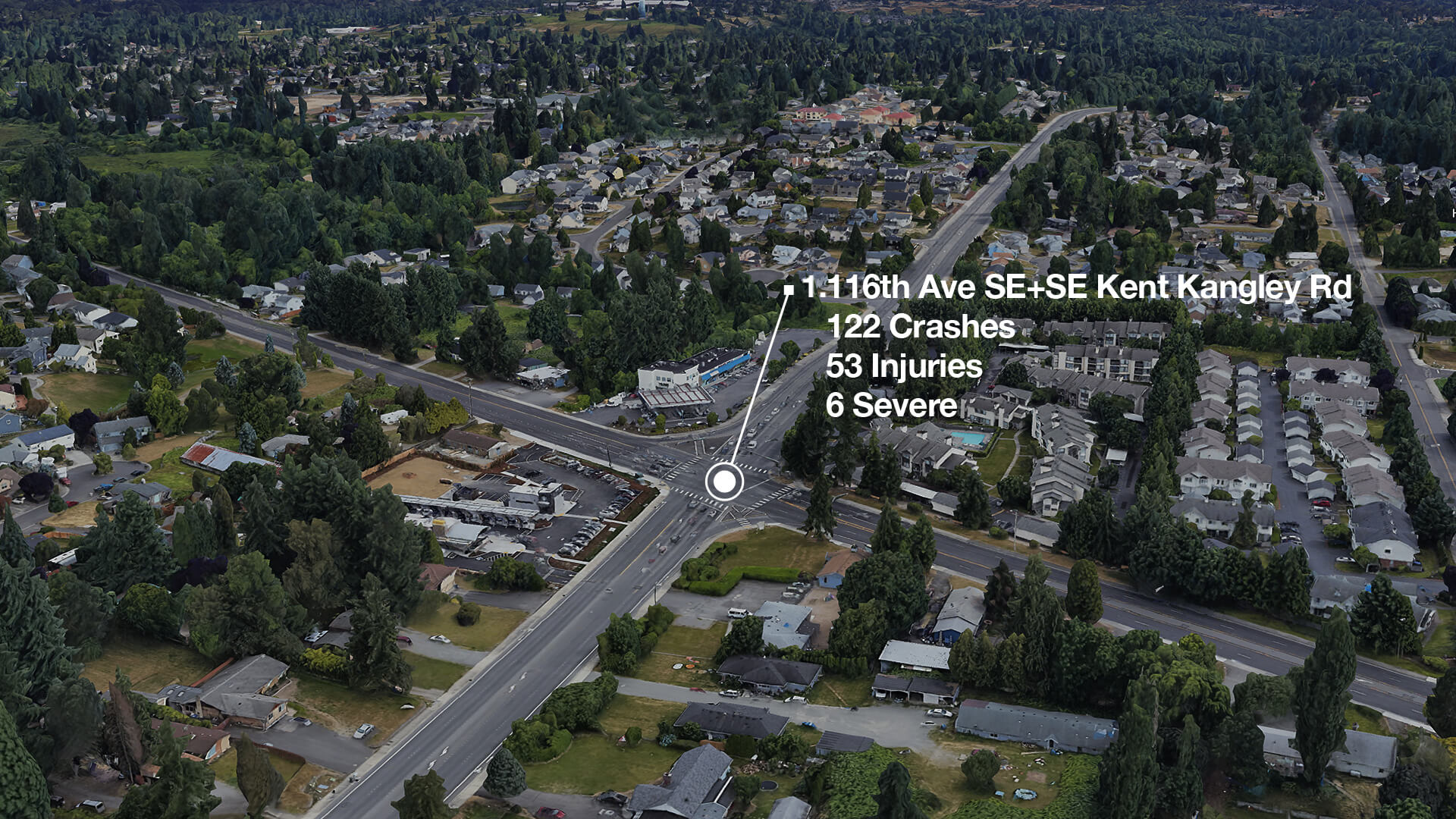 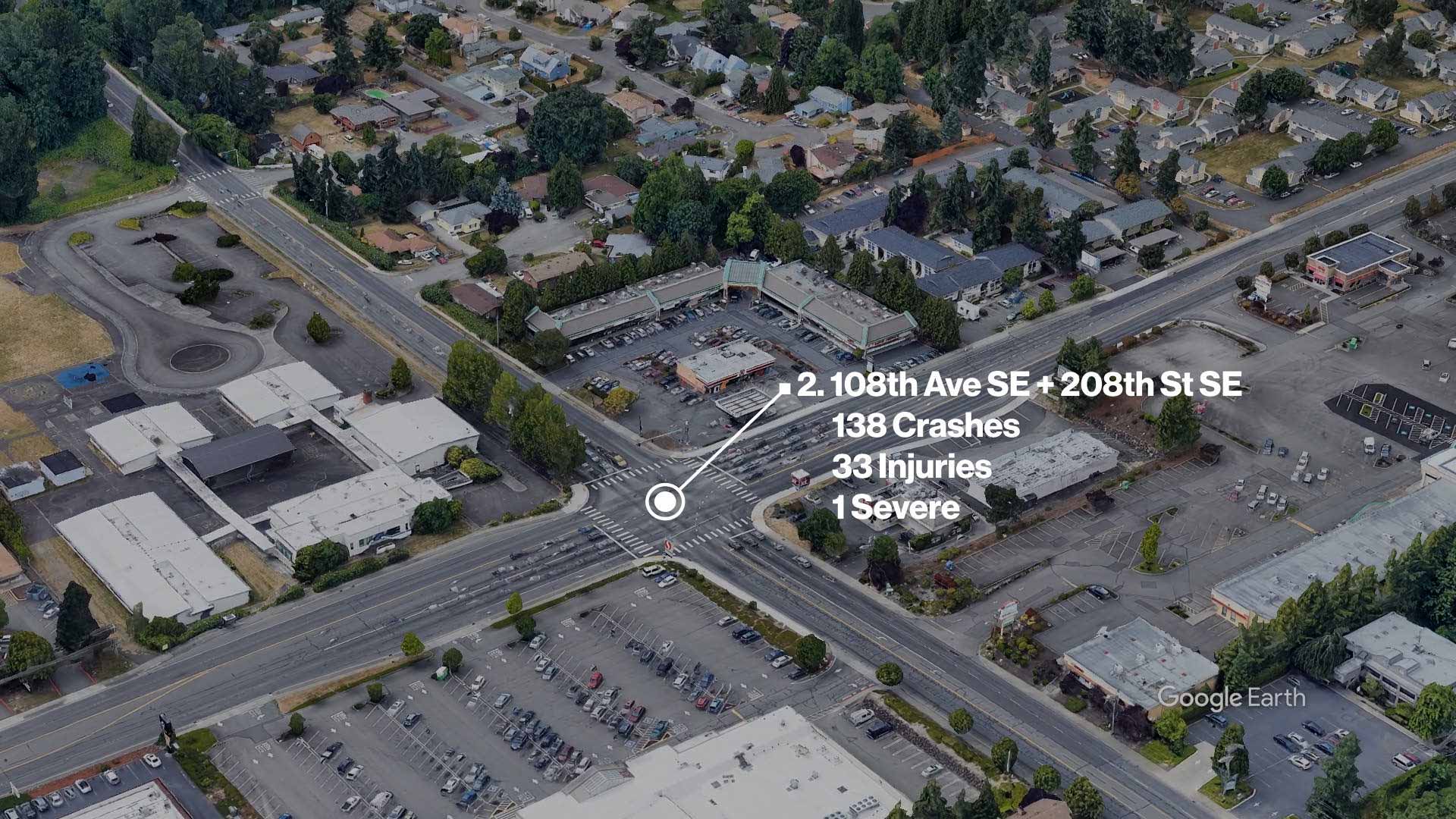 With 138 crashes, this crossing had the most collisions of any intersection in Washington.  While fatalities are relatively rare at intersection-related collisions overall, 108th and 208th was the only one in the top five to see a fatal crash (among only five intersections in the top 50). 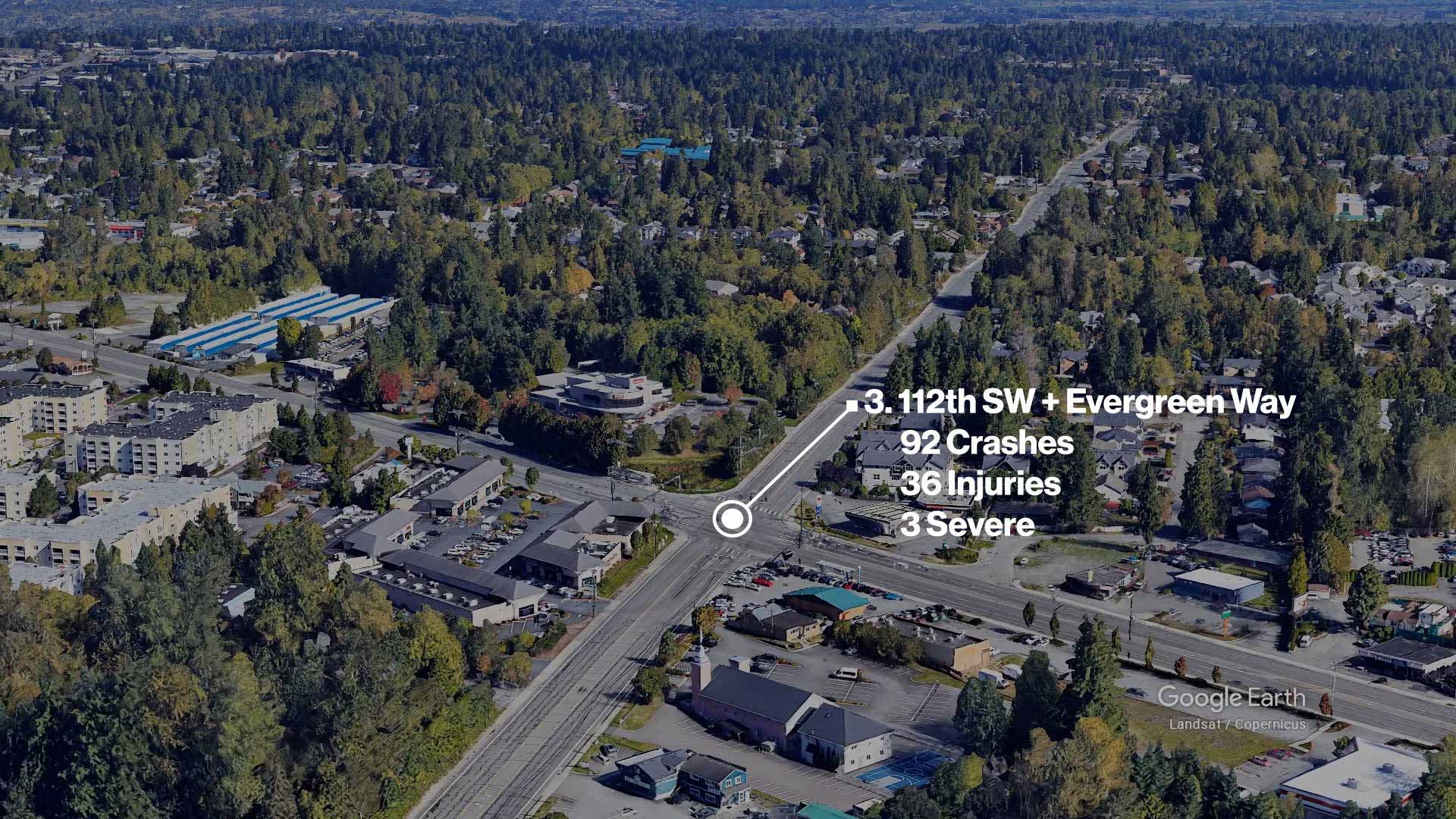 Number three on the list can be found in Everett at 112th SW and Evergreen Way.  This crossing was home to the third most collisions that resulted in severe injuries and second most that caused any kind of injury. 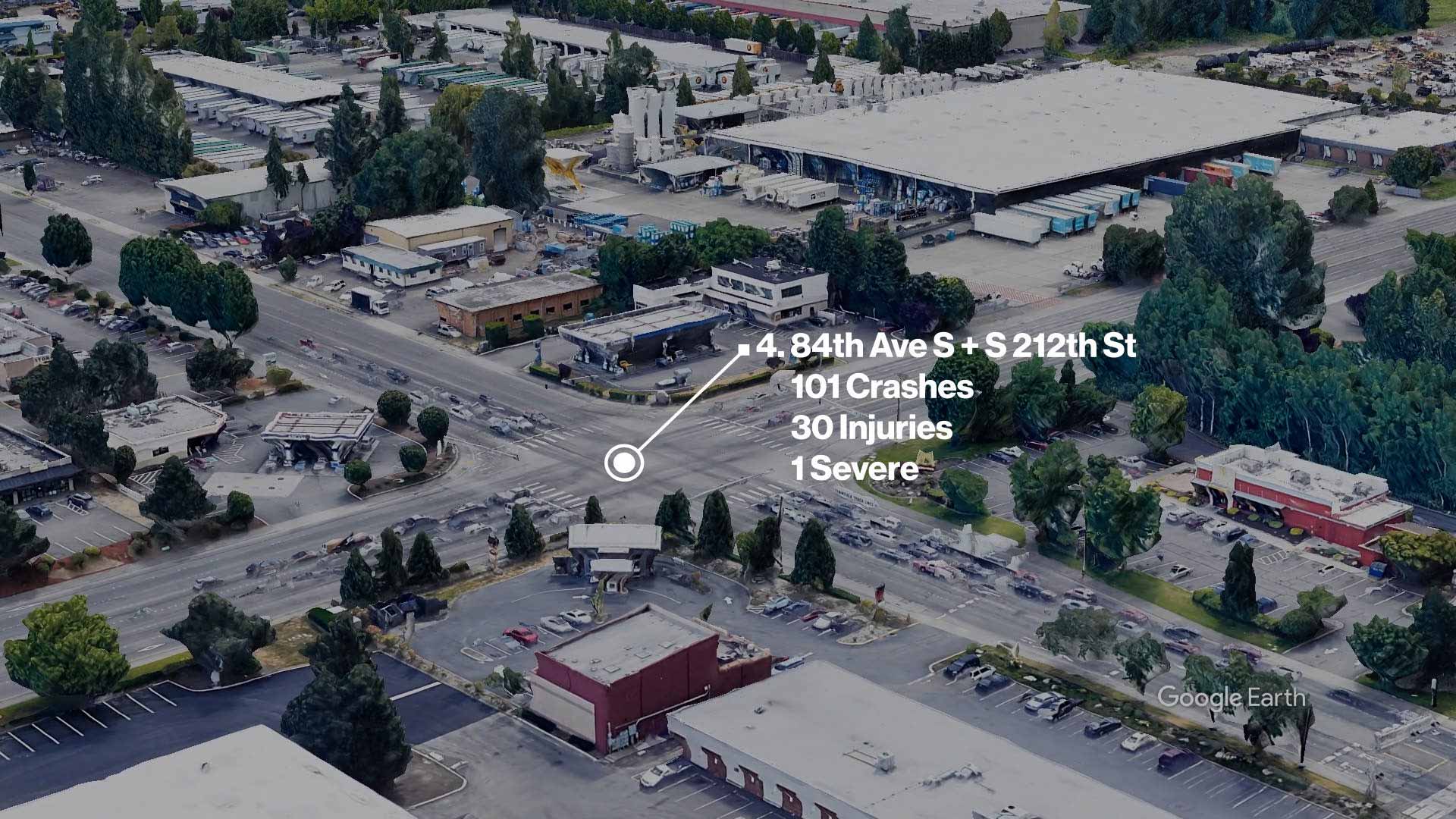 The third intersection in the top five to be found in Kent, 84th Avenue S and S 212th Street was the site of just over 100 collisions, 20 of which caused injuries. 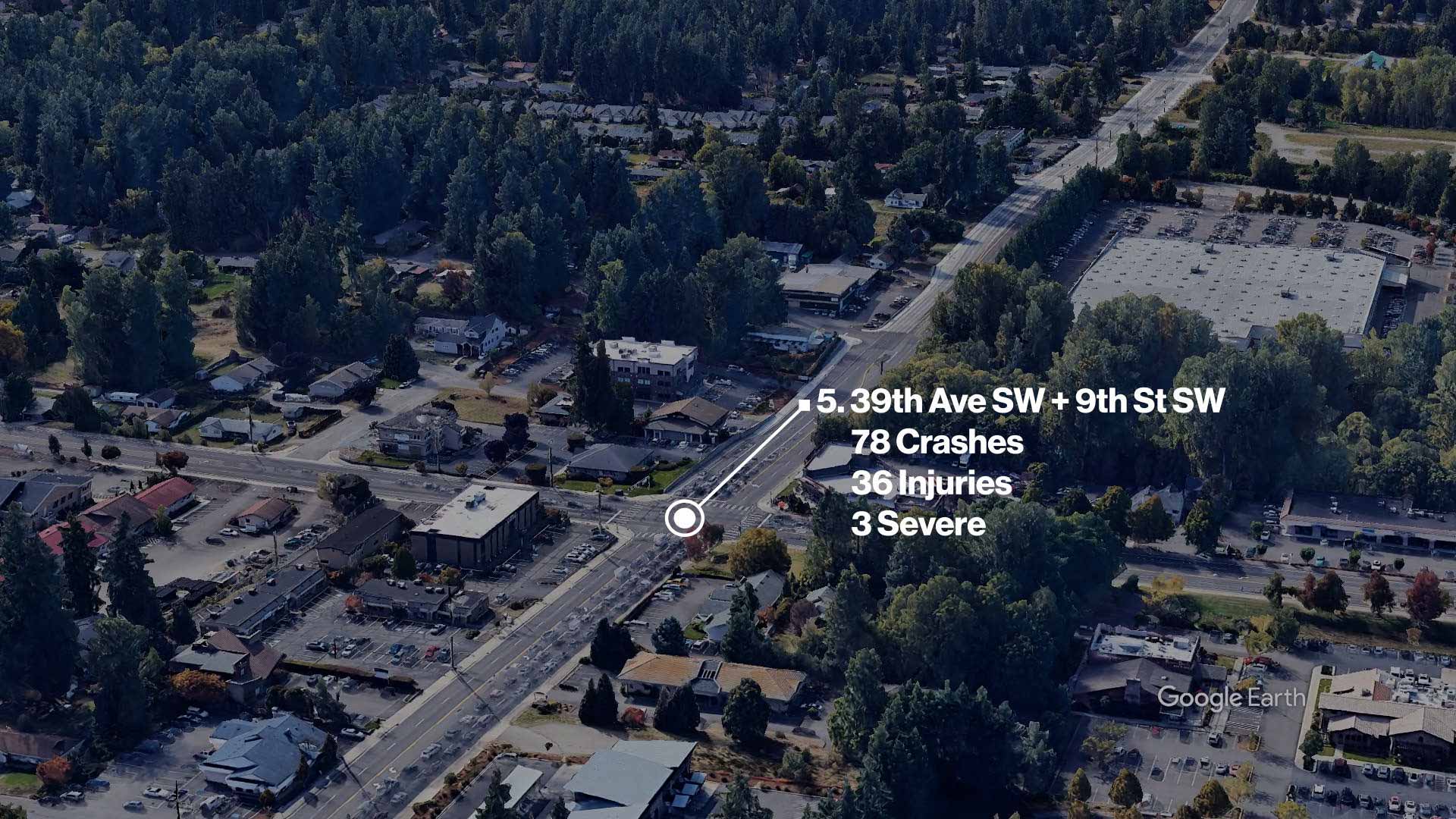 Despite a lower crash volume than the rest of the top five, crashes that did occur this intersection in Puyallup were much more likely to cause injuries.  In fact, nearly half (46 percent) of collisions here resulted in some sort of injury, the highest rate of any intersection in the top five.

Data Sources and Fair Use

Data for this study was sourced from the Washington State Patrol for the years 2017 – 2021.  We hope that readers can use this information to inform their driving habits, the routes they take, and keep themselves and their loved ones safe.

If you would like to report on or republish any of the information, data, or media contained in this report, please provide attribution by linking to this study page.