Posted in Car Accidents,Safety Tips on May 7, 2019 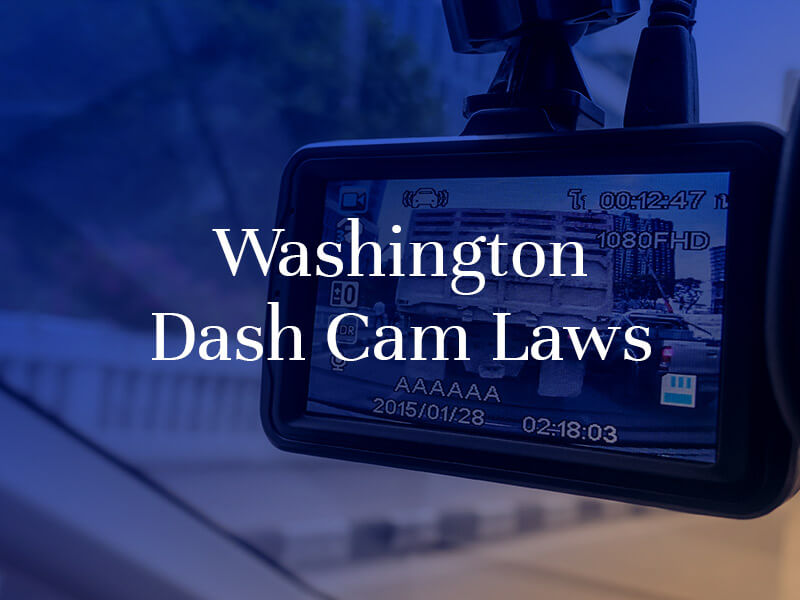 Dashboard cameras, or dash cams, have become more popular in recent years thanks to modern technology. It is easier and more affordable than ever to install a dashcam in a vehicle (or onto helmets, for many motorcyclists). Drivers may install dash cams to record their surroundings – and to potentially catch a crash on camera.

After a collision or a police stop, it may be possible to use dashcam footage as evidence during a case. The owner of the dashcam, however, must obey all state and local laws when using the device. If you have been involved in an accident, contact a Seattle personal injury attorney for more information about your legal options.

Are Dashcams Legal in Washington State?

It is not illegal to install a dash camera in your vehicle in Washington State, as long as drivers do so within the confines of the law. The placement of the dashcam must not obstruct the driver’s view through the windshield. The driver must be able to easily see past the dashcam for an unobstructed view of the road. This can be difficult, as most dash cams do not actually attach to the dash. Instead, they come with suction cups to mount on the windshield.

Where Should I Mount My Dashcam?

Washington State Legislature Section 46.37.410 states that no person can operate a motor vehicle with any nontransparent material (including signs and posters) on the front windshield that obstructs the driver’s clear view of the road. Installing a dashcam could get you into legal trouble if you do not obey this windshield law.

Furthermore, while vehicle owners can record the activity of the roadway using dashcams, it is against the law to record conversations in the vehicle without the consent of all recorded parties. Electronic surveillance is legal in the United States, but not if used for audio recordings without the knowledge of everyone in the vehicle.

Is it Illegal to Record Passengers Inside my Car?

If your dashcam records audio within the cab of the vehicle, you can stay on the right side of the law by letting passengers know you are recording them when they enter your vehicle. Most dash cams do not record audio, however, or have an option to disable the audio feature.

Can I Use Dashcam Footage as Evidence in Court?

Video footage and photographs can present strong, irrefutable evidence during a car accident case. Most personal injury attorneys, police officers, and insurance companies recommend that victims take photos and videos at the scene of the accident, if possible. This can create a strong record of personal injuries, property damages, and potential crash causes (such as tire marks on the road or a hidden stop sign). A dashcam could record everything that happens during a crash, from the initial impact to what happens next. Dashcam footage can be strong evidence that supports your claim.

Liability in a personal injury claim is often a topic of great debate between victims and insurance companies. Having dashcam footage that supports your story and proves someone else’s negligence could help you win your case. Video evidence can prove to an insurance company that its policyholder caused the crash.

It could also serve as evidence that sways the opinion of a jury during a personal injury trial. Jurors can see that the victim is not lying or exaggerating the facts of the case when they watch the accident happen for themselves. Speak to an attorney to find out if dashcam footage you have is admissible as evidence in your case.