What Is Dooring and What Should You Know About It?

Drivers do not always pay proper attention to cyclists on the road. From tailgating to unsafe turns, cyclists are often at risk of serious accidents because of dangerous driver behavior. Even parked cars can be dangerous.

When a driver opens his or her door into the path of a cyclist, the consequences can be devastating. This act is known as dooring.

Drivers often open their doors immediately after parking their vehicles and fail to check for oncoming cyclists. This can catch cyclists off guard, causing them to collide into the door and suffer serious, life-threatening injuries.

Dooring can lead to brain injuries, broken bones, internal organ damage, and many other types of injury. Sometimes, the victim is thrown into the path of traffic and is hit by another car. In many cases, dooring accidents are fatal.

How to Avoid a Dooring Accident 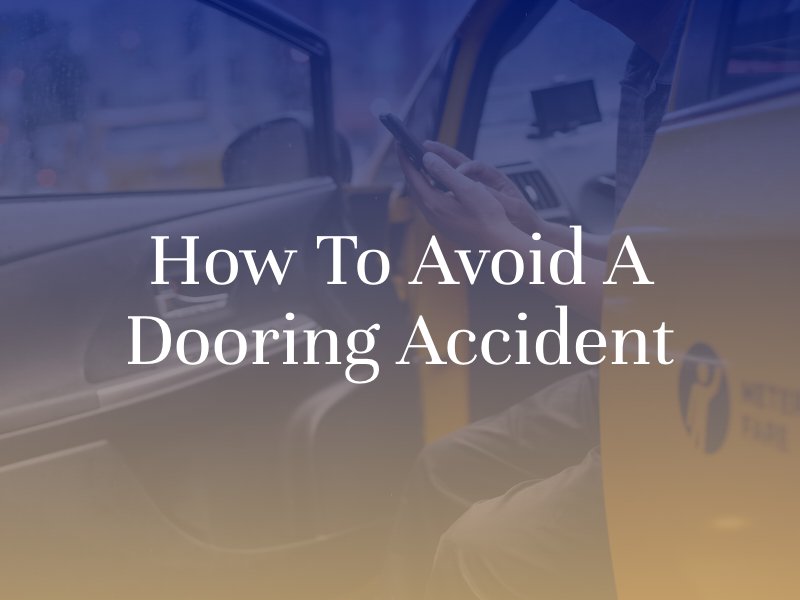 Despite the fact that drivers are supposed to check for oncoming cyclists before stepping out of their cars, few actually do. Dooring can happen any time a driver is exiting a parked vehicle, which makes it even more dangerous.

If you are riding a bike, avoid cycling directly next to parked cars. Try to ride as far to the outside of the lane as possible. Be vigilant and remain aware of drivers’ behavior. You should stop if you see a driver opening his or her door ahead of you and you have enough space to safely do so.

Filing a Bicycle Accident Claim after a Dooring Accident

A dooring accident can have a devastating impact on your life and lead to financial, physical, and emotional hardships. Dooring is an extremely negligent act and drivers who fail to look for cyclists deserve to be held accountable.

In Washington, drivers who cause accidents are financially responsible for the damages of their victims. Dooring is a prime example of a driver’s failure to uphold his or her duty of care.  If you were doored, you could file a lawsuit or insurance claim against the motorist who caused the accident.

Through your claim, you could recover a settlement to pay for medical care, lost wages, and even damage to your bicycle. In these situations, it is important to consult with a Washington bicycle accident lawyer who can represent your case and help you recover the settlement that you deserve.

What to Do If You Are Doored in Washington State

If you are injured in a dooring accident, it is important to stay calm, remain at the scene of the accident, and seek help as soon as you can.

Once you receive medical care, it is time to seek legal representation. As soon as possible following your accident, contact a Washington bicycle accident lawyer to discuss your legal options.