What to Do in a Bicycle Hit-and-Run Accident

Cyclists are vulnerable to serious accidents on the road. When a bicycle accident occurs, all parties are required to stop and exchange information—but not some drivers flee the scene, leaving injured cyclists without a means for seeking justice.

If you are involved in a bicycle hit-and-run accident, it can be difficult to know what to do next. Here are the steps that you need to take to protect yourself and preserve as much evidence as possible.

Stay Calm and Get to Safety

The first step you should take after a hit-and-run accident is to get to safety. If you are lying in an area where you could be hit by another car, move out of the road to a safe location.

Don’t panic and try to remain as calm as possible. If you’re in a safe place, take a few deep breaths to relax and collect your emotions.

Call 911 as soon as possible following the accident and report the collision to law enforcement. Emergency medical services will also arrive at the scene; if you require immediate medical care, do not refuse assistance from these providers.

Although it may be tempting to pursue a fleeing driver, doing so can be very dangerous. Do not try to track the driver down or stop him or her from leaving the scene.

Instead, record as much information as you can remember. If you can, make sure to include the following details: 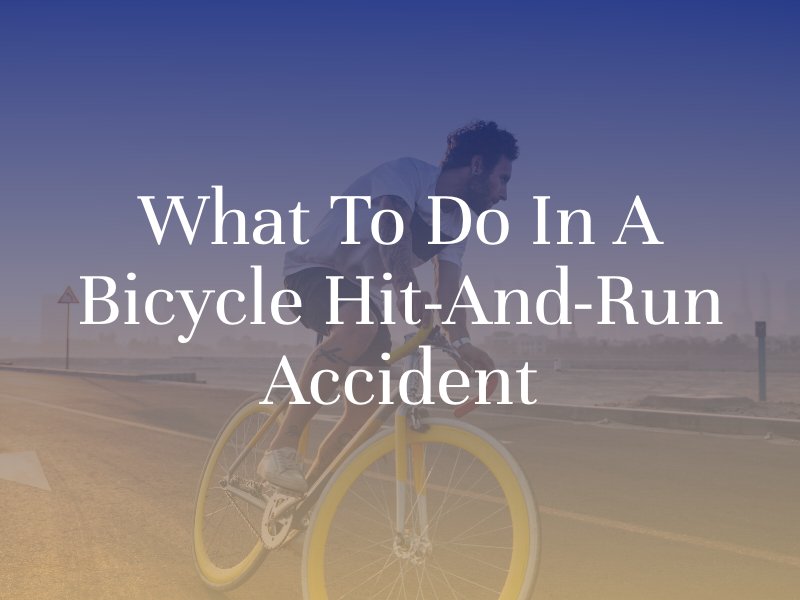 You should seek medical care immediately after a hit-and-run accident, even if you do not feel injured. Some injuries don’t show symptoms until a few hours after the collision. Go to the hospital as soon as you can and save all records that describe your injuries and the treatment that you received.

If other people saw the accident happen, their eyewitness accounts could help identify the driver and support your insurance claim or lawsuit. Speak to witnesses in the area after the accident and ask if you could have their contact information. If you are unable to speak to witnesses after the crash, do not worry—the police report may also contain their information.

Photographs and videos can go a long way in supporting a hit-and-run accident claim. After the accident, take pictures of your bicycle, any visible injuries, traffic signs and signals in the area, and the road surrounding the collision. If you are able, try to take a photograph or video of the hit-and-run driver before he or she flees the scene.

After you receive medical care, reach out to a bicycle accident lawyer who can represent your insurance claim or lawsuit. An attorney can provide valuable support during your case and explain your options for compensation. He or she may even be able to help identify the hit-and-run driver.

As soon as possible following your accident, speak to a Washington bicycle accident lawyer to discuss your case and take your first steps toward justice.