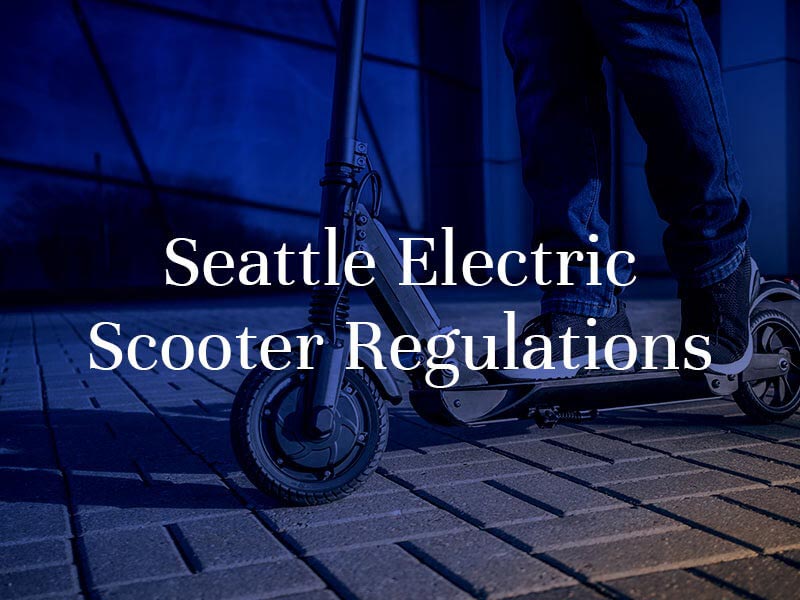 Electric scooters have gained phenomenal notoriety in recent years throughout the United States. Despite the increased popularity among the general population, some cities, like Seattle, have challenged their safety. The question remains whether a safe way to integrate motorized scooters into the realm of public transit exists.

Peugeot was the first commercial electric scooter manufacturer. The company introduced its first functional e-scooter in 1996. The scooter was heavier than modern electric scooters, weighing 250 pounds. Despite its weight, the scooter’s battery power was impressive, providing 25 miles worth of travel with each battery charge. Many manufacturers tried to improve this clunky, heavy version of the scooter, but many of these failed models no longer exist. Earlier manufacturers couldn’t figure out how to effectively house such large batteries within small-framed scooters. It wasn’t until technology allowed for more efficient battery storage in the early 2000s that the modern electric scooter emerged.

As motor scooters became more common, they gained popularity not only as a fad, but for their utility in traveling within the intercity environment. The scooter-sharing service, Scoot Networks, launched their business in San Francisco in 2012. Scooter sharing has gained traction in additional American states and European countries alike since then.

The Growing Market for Scooters

The first dockless e-scooter sharing service emerged in 2017. This made obtaining these vehicles even easier, as riders could simply pick up a scooter on the sidewalk and travel to their destination without worrying about finding a docking station. The market for electric scooters continues to grow.

Concerns about the safety of electric scooters have risen along with their increased popularity. However, little solid research exists that provides comprehensive statistics. Although no national data on the danger of electric scooters is available, several agencies attempted to gain some information about the incidence of scooter-related accidents.

One such agency, Consumer Reports, collecting information from 23 medical facilities in California, reported that a total of 1,545 patients required treatment for e-scooter injuries in 2017. This figure may be higher, because the 23 medical facilities chosen do not represent the state as a whole.

In Portland, Oregon, a four-month pilot program revealed electric scooters made up five percent of all traffic incidents. The researchers calculated the average injury rate for e-scooter use was 2.2 accidents for every 10,000 miles traveled. However, the study’s researchers noted that not all of the injuries were related to rented e-scooters, making the injury rate lower in reality. Contact a Seattle personal injury lawyer today if you have been injured on an electric scooter.

Setting guidelines in reference to scooter usage decreases the overall incidence of injury. One of the biggest issues surrounding electric scooters is the lack of helmet regulation for dockless scooters. Helmet laws and regulations address this issue. Traffic-related injuries are also a worry for those concerned with e-scooter safety. A recent proposal has been to introduce scooter lanes, which would function much like bike lanes.

Why Do People Want Electric Scooters?

Two main reasons are cause for the growing popularity of electric scooters. Both reasons typically center around urban cities, which is where the market for e-scooters is greatest. The first reason for e-scooter growth is its fuel efficiency. In these congested urban cities, electric scooters have value because they leave small a physical footprint and don’t leave a carbon footprint at all. This is valuable when comparing the environmental impact that e-scooters have versus other modes of travel.

Electric scooters are also helpful when traveling within urban environments. It reduces the stress associated with traffic and parking when attempting to drive a car during busy traffic hours. E-scooters are also cheaper to rent than car-sharing and taxi-sharing services, which also charge higher rates during hours that are known to be busy. Moreover, motor scooters typically have shorter trip durations, making them extremely advantageous when traveling in the city.

Electric scooters are gaining support in Seattle. Council member Teresa Mosqueda personally supports the push for e-scooters, advocating Seattle’s upcoming pilot program to distribute scooters throughout the whole city for riders to take advantage of. An additional council member, Abel Pacheco, supports e-scooters because many residents, like himself, don’t own cars.

Providing other means of transportation would decrease the public’s dependence on cars, especially with the younger population that travels a lot within the city. Supporting Pacheco’s reasoning, these younger crowds note that e-scooters would allow them to dress appropriately for events that require dresses and suits without the hassle of ruining their garment while riding a bike or moped.

Seattle is introducing a two-month pilot program that allows residents to rent electric scooters available throughout the city. The pilot program specifically addresses the safety hazards associated with dockless e-scooters. The intent is to introduce electric scooters into the city within a safe context that prevents a large increase in accidents from the start.

In the past, Seattle had not only banned scooter-sharing services from operating in the city but also prohibited user-owned electric scooters from traveling in bike lanes and sidewalks. However, the city is addressing this issue by working with their transit and bike oversight boards to determine when and where riders can use e-scooters and how fast they can travel.

Included in conversation is the question of helmet laws and what the regulations surrounding helmet use should be. This discussion comes from a valid perspective, as Portland’s pilot program discovered riders intentionally rode and parked on sidewalks, which caused problems for pedestrians.

With discussion about the pilot program underway, Seattle established a new set of motorized scooter laws to prevent future injuries when the program begins:

Seattle’s Department of Transportation can dictate specific speed-limit zones that riders must abide by. These locations differ depending on the situation. Several rules and regulations surround Seattle’s speed-limit zones:

Victims of the Maple Valley Highway Dump Truck accident can call us for a free legal consultation.