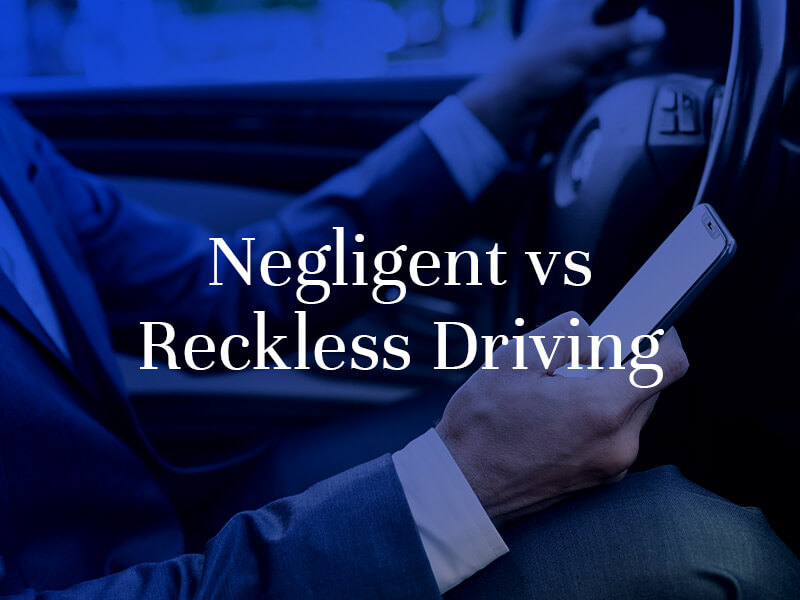 Negligence and recklessness are two different types of driver behaviors. While both can cause serious auto accidents and severe injuries, they each have distinct legal definitions under Washington State law. Understanding the difference between negligent and reckless driving can help you navigate an auto accident case. It could also lead to a different result during a car accident civil lawsuit. Judges award punitive damages more often for recklessness than negligence. If you have been involved in an accident, contact a Seattle car accident lawyer.

Negligence means the driver failed to fulfill his or her duty to exercise reasonable care for the safety of others on the road. Examples of negligence include traffic infractions such as not using a blinker, falling asleep behind the wheel, or failing to yield the right-of-way at an intersection. Negligence can cause car accidents by ignoring the rules of the road or falling short of the accepted standards of care. Most drivers are guilty of negligence behind the wheel at least once in the last 30 days. A negligent driver, however, does not reach the level of recklessness.

A reckless driver is one that behaves with a wanton disregard for others’ safety. Reckless drivers understand the risks of their behaviors, but drive recklessly anyway. They operate vehicles in a dangerous manner that increases the risk of accidents and injuries. Reckless drivers willfully or intentionally engage in unsafe driving behaviors, rather than doing so by accident. Examples of reckless driving include drunk driving, excessive speeding, street racing, red-light running, driving at night without headlights, and texting and driving.

Intent is the main differentiating factor between negligence and recklessness. Negligence is accidental, while recklessness is intentional. In deciding whether to issue a citation for negligent or reckless driving, an officer will look at the severity of the offense, its repercussions, and whether the driver reasonably should have known his or her actions were risky. If a driver was simply careless behind the wheel, he or she may be negligent. If the driver had a willful or wanton disregard for safety, it is reckless driving.

Under Washington law, negligence means the failure to exercise an ordinary degree of care, or doing something that a reasonable and prudent driver would not do under similar circumstances. The definition of reckless driving is operating any vehicle with a willful or wanton disregard for the safety of people or property. Reckless driving is a gross misdemeanor in Washington State, punishable with up to $5,000 in fines and/or up to 364 days in prison. Reckless driving is a more serious offense, with harsher penalties than negligent driving.

Negligence vs. Recklessness in a Civil Case