Are Punitive Damages Available if You Were the Victim of a Drunk-Driving Crash? 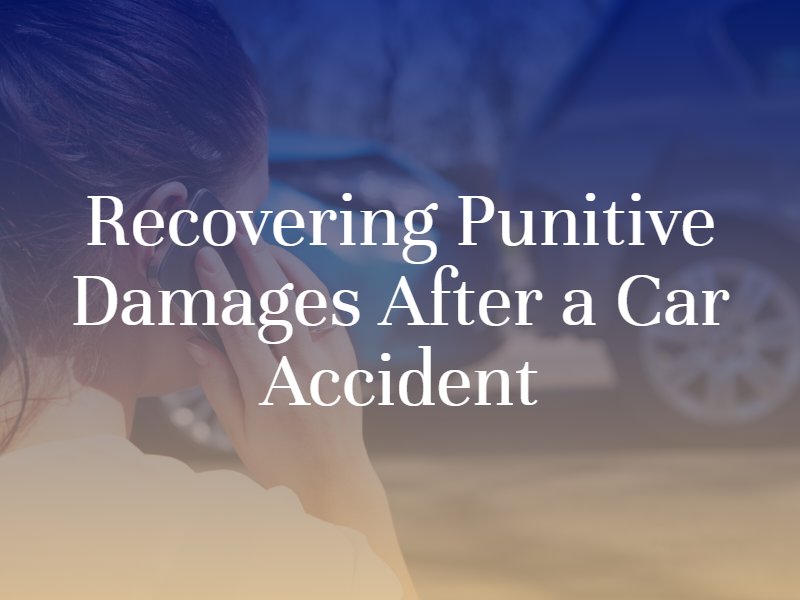 Drunk driving is one of the most dangerous acts a motorist can commit. Alcohol impairs many of the body functions that you need to drive safely, including motor skills, concentration, judgement, and reaction time. If you are in an accident with a drunk driver, you can experience significant damages, including medical expenses, vehicle repairs, and lost wages.

What Are Punitive Damages?

Washington is a fault-based accident state that allows victims to seek damages from drivers who cause collisions. After any car accident, you can suffer from injuries that result in damages. Washington law recognizes two common categories of damages: economic and non-economic.

Economic damages refer to the financial losses you experience as a result of the accident. These may include past and future medical expenses, lost wages, vehicle repairs, and property replacement. Non-economic damages involve physical and emotional pain and suffering, such as emotional distress, chronic pain, or loss of quality of life.

The third category of compensation is known as punitive damages. While economic and non-economic damages reimburse you for the losses you suffered, punitive damages intend to punish the at-fault driver and dissuade him or her from committing the same actions again. While laws vary from state to state, courts typically award punitive damages in cases involving gross negligence or intentional harm.

Washington is one of a handful of states that do not allow car accident victims to seek punitive damages. States that do award punitive damages are responsible for establishing criteria that a case must meet to qualify for the additional compensation. Oftentimes, these actions involve some sort of fraud, malice, recklessness, or intentionally harmful behavior. Courts often find drunk driving accidents qualify under these definitions.

For example, Oregon requires plaintiffs to prove that an at-fault driver acted with malice or showed a reckless indifference to a highly unreasonable risk of harm, acting with a conscious indifference to the health and safety of the plaintiff. Since drunk driving is an undisputedly dangerous act and a crime under Oregon law, an Oregon car accident victim could argue The plaintiff may present several pieces of evidence to prove his or her point, including the driver’s toxicology report or information from the police as evidence of the driver’s actions.

Unfortunately, Washington drunk driving victims do not have this option—but if you are suffering from injuries due to the actions of a drunk driver, you have multiple legal pathways to seek compensation. Contact a Seattle personal injury lawyer today at Colburn Law to discuss your case.

Under Washington law, you have the right to file an insurance claim or personal injury lawsuit against the driver responsible for your injuries. You may not be able to claim punitive damages, but you can still recover the compensation you need to pay for the losses you endured due to the actions of the drunk driver.

Working with a Washington car accident lawyer can help you pursue these avenues of compensation. Your Seattle car accident attorney will represent you throughout the insurance or litigation process, guiding your preparation and advocating for your best interests each step of the way. Contact Greg Colburn as soon as possible following your accident.