The seaport city of Seattle is the largest city in the state of Washington, as well as the largest in the Pacific Northwest. As of the latest census, there were 713,700 people living in Seattle. Seattle residents get around by car, trolley, streetcar, public bus, bicycle, on foot, and by rail. With such bustling streets, it’s no surprise that Seattle sees car accidents every day.

In 2015, a crash occurred in Washington every 4.5 minutes. Seattle recorded the highest number of car accidents in the state that year, at 14,508 (in second place was Tacoma with just 4,756). Although the city is taking steps to make the roadways safer for citizens, vehicle collisions are still a serious danger. Here are a few facts about traffic accidents in the Emerald City.

According to 2019 data from the Washington State Department of Transportation (WSDOT):

According to data from the Washington State Department of Transportation (WSDOT)

Deaths Are Up, but Serious Injuries Are Down

In the beginning of 2016, the Seattle Department of Transportation (SDOT) issued their annual traffic collision report. A summary of the report found good and bad news on the numbers for the previous year, 2015 – the number of serious injuries in Seattle had decreased, but the number of traffic deaths had increased. The report noted that the city of Seattle would have been on trend to fulfill its Vision Zero goal in 2015 had it not been for a single crash that accounted for 25% of all traffic deaths in Seattle.

In 2015, Seattle saw the horrifying Ride the Ducks vehicle crash on Aurora Bridge – an accident that killed five people and injured 69 others. Improper vehicle maintenance led to a mechanical failure that caused the amphibious passenger vehicle to crash into a bus full of North Seattle College students. This incident brought Seattle’s traffic deaths to 20 in 2015, up from 17 deaths the previous year. 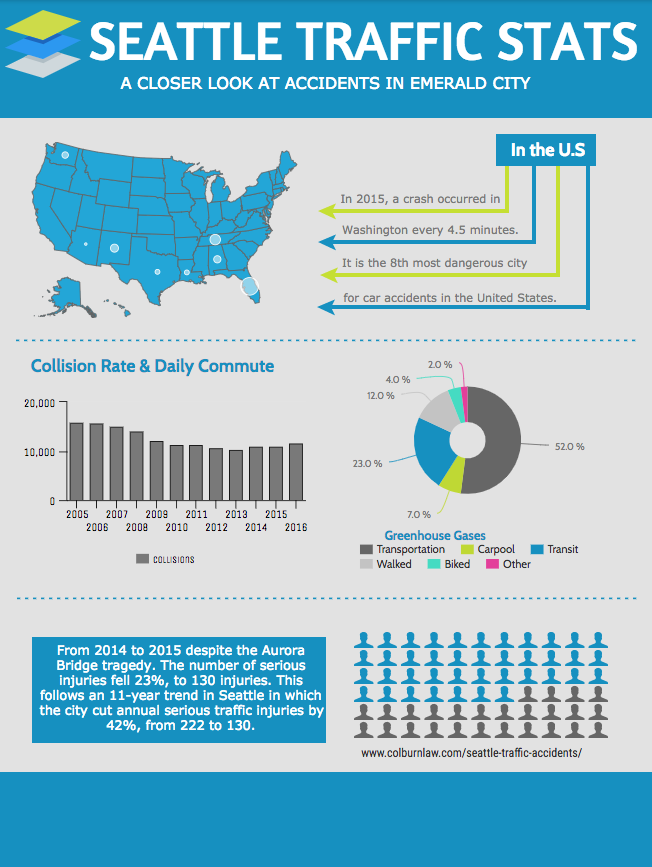 Surprisingly, Seattle’s rates of serious injuries still decreased from 2014 to 2015 despite the Aurora Bridge tragedy. The number of serious injuries fell 23%, to 130 injuries. This follows an 11-year trend in Seattle in which the city cut annual serious traffic injuries by 42%, from 222 to 130. City leaders are proud of Seattle for decreasing the numbers of accidents, and will continue to work hard to protect drivers, bicyclists, and pedestrians.

All around, the future looks bright for drivers and pedestrians in Seattle. However, people are still suffering serious injuries in hundreds of car accidents each year. Those who survive traffic accidents can face hefty medical bills, thousands of dollars in lost wages and property damage, pain and suffering, and lost quality of life. A collision could cause permanent disability, stripping the victim of the life he or she might have had. For compensation for all of these serious losses, car accident victims can turn to the Seattle civil court system.

Washington is a fault state when it comes to who will pay for victims’ damages. This means that after a crash, claimants must determine who was at fault to know where to seek recovery. The at-fault party could be the other driver, the company in charge of the vehicle or driver, a vehicle manufacturer, or the city of Seattle for an unsafe roadway. Many crashes involve the fault of more than one party. Washington is a pure comparative negligence state, meaning that a party can share fault for a crash yet still be eligible for financial recovery.

It’s important to talk to an attorney about who could bear the blame for your traffic crash, as the first step toward compensation. Issues regarding car insurance, fault, and the civil courts can be complex. A Seattle car accident lawyer is especially important if your accident involved a public transportation system, government fault, drunk driver, or hit-and-run. After a traffic accident in Seattle. the sooner you seek legal representation, the better.