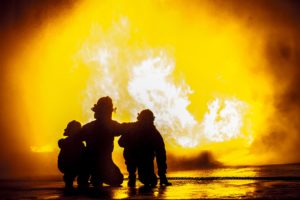 However, the new law carves out an exception for firefighters, emergency medical technicians, and police officers. In addition, the law creates a presumption that posttraumatic stress disorder is an occupational disease.

For the presumption that PTSD is an occupational disease to apply, First Responders must have served for a minimum of ten years before the posttraumatic stress disorder develops or manifests itself.

The new law allows First Responders to claim industrial insurance benefits from PTSD acquired from exposure over a period of time.  First Responders who develop PTSD as the result of acute exposure to a single traumatic event have long been eligible to file a claim for workers compensation due to suffering an industrial injury.

The Industrial Insurance Act allows benefits for an “injury” which is defined by RCW 51.08.100 as “a sudden and tangible happening, of a traumatic nature producing an immediate or prompt result, and occuring from without, and such physical conditions as result therefrom.”  Such a claim for an industrial injury must be filed within one year of the date of the injury to be valid.

“Occupational Disease” is defined by RCW 51.08.140 as a “disease or infection as arises naturally and proximately out of employment…”  Occupational disease claims must be filed within two years after the date that an injured workers is provided “written notice” from a physician of the disease. RCW 51.28.055.

Even the most qualified and experienced First Responders suffer the emotional consequences of a job that requires daily contact with life and death circumstances. “Firefighters and EMTs are statistically more likely to die of self-inflicted injuries than in the line of duty, with 87 line of duty deaths and 108 suicides verified by the Firefighter Behavioral Health Alliance,” as reported by Fire Chief Digital.

“A study of fire service ideation of suicide (preoccupation or recurring thoughts of suicide) in a partnership with National Fallen Firefighters Foundation and Florida State University found nearly half of 1,000 fire service respondents reported encountering suicidal thoughts at one or more point in their firefighting career, and another 15 percent reported one or more suicide attempts.”

An additional study of First Responders published in the Journal of Emergency Medical Services found that “3,447 (86%) of the 4,022 respondents experienced [Critical Stress], but the shocking discovery was that 1,383 (37%) of the respondents had contemplated suicide and 225 (6.6%)” had actually tried to take their own life. These statistics are roughly 10 times greater than the national average for adults in America, according to a study done by the Centers for Disease Control and Prevention in 2012.  Even taking into account inherent survey bias, these figures were mindblowing. This information concretely establishes the fact that EMS provider stress is prevalent in our nation and is extreme, to say the least.”

Washington State is taking steps to help our firefighters, paramedics, and police officers suffering from PTSD due to their inherently stressful jobs. More work remains to be done as the new law does not apply to volunteer firefighters, reserve police officers, or other professional first responders depending upon their membership in certain state retirement plans.

If you or a loved one is a First Responder suffering from PTSD, please know that there are resources available. The Firefighter Behavioral Health Alliance provides a free resource for Firefighter and EMT Suicide Screening, which includes contact information for the National Suicide Prevention Lifeline (800-273-8255) and the Share the Load Program  Share the Load Program (888-731-3473).

If you need help filing a claim for workers’ compensation benefits due to PTSD, contact Colburn Law immediately. It is important for police officers, EMTs, and fire fighters in King County, Pierce County, Snohomish County and across the state of Washington to protect their rights as soon as possible. For example, the presumption of work-related Post-Traumatic Stress Disorder exists only for “three calendar months for each year of requisite service, but may not extend more than sixty months following the last date of employment.”

Contact us to review your industrial insurance claim. Call our injury attorneys at Colburn Law today to ensure your case is handled in the best manner possible.