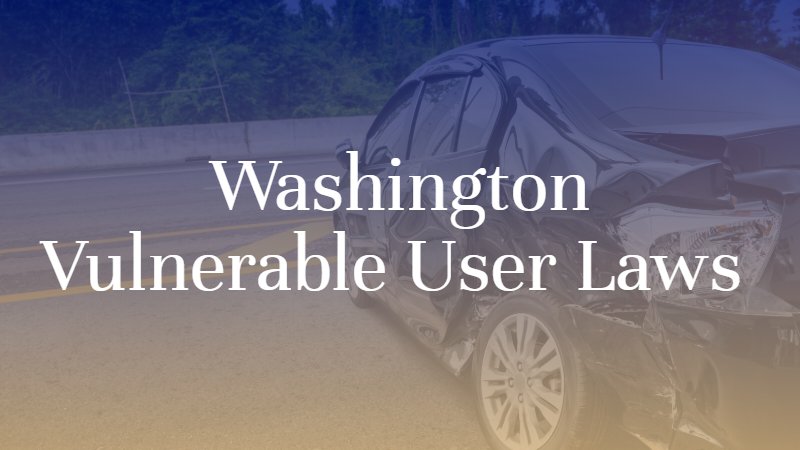 Traffic safety is a priority for Washington — especially when it comes to reducing fatalities and injuries among the most vulnerable people on the road. Pedestrians, cyclists, scooter users, and wheelchair users can suffer severe damage during collisions with motor vehicles due to the sheer size and weight difference. The resulting injuries can be even more serious compared to collisions between drivers.

To increase protections for these individuals, Washington legislators brought SB5723 into law beginning on January 1st, 2020, as well as the Vulnerable User Law in 2012. One of the most significant changes to Washington traffic law to date, this law establishes additional safety provisions and imposes higher fines and penalties for drivers who injure or drive dangerously around vulnerable users on the road.

Who Counts as a Vulnerable User?

Under SB5723 and the Vulnerable User Law, certain people on Washington roads fall under the vulnerable user designation. This group includes pedestrians, cyclists, scooter users, and electric wheelchair users, as well as the following groups of people.

Drivers’ Responsibilities Under SB5723 and the Vulnerable User Law

The driving forces behind SB5723 and the Vulnerable User Law came with the death of 49-year-old John Przychoden in 2011, after a pick-up truck struck him twice while he was riding his bike on the shoulder of a road in Kirkland, Washington. The teenage driver received a $42 ticket for making an unsafe lane change, and this minor punishment drove activists to call for greater protections and harsher penalties for negligence-caused injuries and fatalities of vulnerable users.

The most significant change of traffic law under SB5723 involves how drivers pass vulnerable users, like cyclists and horseback riders, on the road.

Changes for Cyclists Under SB5723

In addition to the requirements for drivers, cyclists are also subject to certain rules under SB5723. Depending on the space available in the lane, cyclists must ride as far to the right of the road as possible to allow vehicles to pass safely.

If you suffered injuries as pedestrian, cyclist, or other vulnerable user as a result of a negligent driver, you have legal options available to you beyond these laws. Depending on the circumstances of your case, you can claim compensation through an insurance claim or personal injury lawsuit. Contact a Washington personal injury attorney as soon as possible to discuss your case and strategize your next steps.

For More Information on Bike Safety: